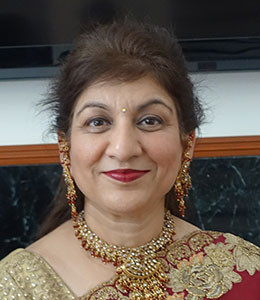 “I truly believe that dreams have no shelf life so I am very excited that we are sharing the dreams of participants from teens to fifties,” said Dr. Manju Sheth, president of INE MultiMedia. “Conceptualizing the’ Dreamcatchers’ show as well this fashion show was a dream of mine and I want to thank all those who made my vision a reality.”

Here is a brief profile of dreamcatcher models and their dreams.
Sunita Malhotra: At 40, Completes Arangatram; at 54, Competes in Zee TV DID Super Mom Competition

When it comes to dreaming, age has nothing to do with Malhotra. She is a dreamer and works hard to realize her dreams. “At age 40, I accomplished my beautiful dream and had my Arangatram in Bharatnatyam. Today, I continue to learn different dancing styles and perform in many cultural events. At age 54, I competed in Zee TV DID North America Super Mom Competition and won second runner up title in the Final which was held in Mumbai, India. I strongly believe one is never too old when it comes to learning.” 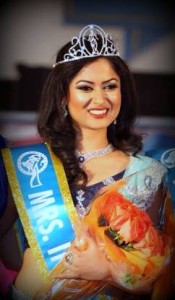 Namita Dodwadkar made history this year when she was crowned first-ever Mrs. India USA. Born and brought up in Pune, India, Dodwadkar came to the United States in 2007 for higher education and received MS and Ph.D. degrees from Northeastern University. “I fulfilled my dream of beauty with brains by completing my PhD in cancer research and by being crowned as the First Ever Mrs India USA. No dream is too small or too big, it is your hardwork and determination that will make your dreams come true.” 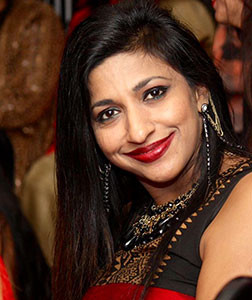 Iyer is a CPA, and in addition has professional qualifications of CA and CWA from India. After working in the corporate world as an Auditor for many years, she now pursues volunteer opportunities and serves on the Audit Committee of her Town. Iyer has taken both her childhood passion of playing Chess and dream of promoting the game and made it into a reality. She is a MACA registered Chess Coach and has started and successfully run Chess Clubs in the Andover, North Andover area for the past six years.
Shreya P Ranganarayan: Marathon is in the Family 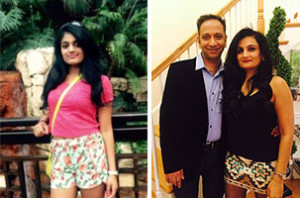 A dream is a great thing, but when a dream becomes a family’s dream, it is called a super dream. “Having been able to train with my dad and complete a half marathon at a young age of 15 has been a fulfilling experience. Running gives me physical fitness, feeling of personal achievement and opportunity to benefit several causes by raising funds,” says Shreya. “We have set our sights on full marathon next year.”

Shrey’s father Ranganarayan Narasimhan says that “training with my daughter Shreya for half marathon and loosing about 20 pounds during the process and being able to come into running shape” was his dream. Adds mother Nehal Ranganarayan: “We as a couple have been able to develop successful and growing businesses, and being able to balance our time with work and children, and also generate employment for others.”

Kelkar is a professional model, classically trained Bharatnatyam dancer, Bollywood-fusion dance choreographer, and a Human Resources professional. She is also a full-time mom of 2 kids. Her hobbies include writing poetry, traveling, cooking, fashion and volunteering. Kelkar achieved her biggest dream when she won the Mrs India New England 2014 crown, 1st Runner Up at Mrs India USA 2014, and became a professional model. After having kids, she lost 60 and 40 pounds respectively, a total of 100 pounds, and continued her passion for dance as well as entered glamor industry.

Dancing has always been a huge passion for Balaji. She had learned bharathanatyam for 12 years but never had a chance to do her arangetram before college and it became a dream for but she wasn’t sure if she would ever be able to accomplish it. “This year, I took time off from work and dedicated my free time to dance,” says Balaji. “With the help of my guru Jayshree Bala Rajamani, I was able to achieve my dream.”

This husband-and-wife team has put a lot of energy into the India Association of Rhode Island where they serve as members of the executive committee. “We are active members of Indian Association of Rhode Island and we have been able to fulfill our passion of bringing tens and thousands of Indians and Americans together who belong to all walks of life,” the couple says. 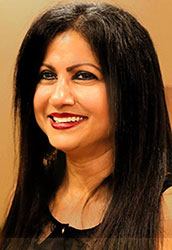 Shetty makes the American dream of owning a home a reality. She has been able to fulfill her dream of making a successful career in real estate for over 20 years. “I have received one of the Top Producer Awards from Northeast Board of Realtors for the past 15 years. This year I won the No.1 independent agent for Keller Williams Realty for our company in Andover and covering all towns in Massachusetts,” says Shetty.” I have been chosen to attend New Orleans National convention in 2016 as a panelist. Thank God and my dear loving mom who gives me the strength, watching over me as an angel, and friends.” 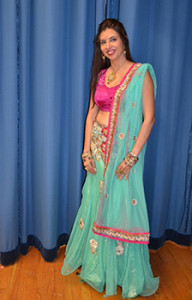 Though being a physician and leader of Indian Medical Association as President, Dr. Arora’s dream passion remains dancing. She has learnt various forms of dances including Ballet, Jazz, Salsa, Kathak, Bhangra, Folk and Bollywood. “Combining all the above, I have developed my own ‘Fusion’ style of dancing which I have been performing and training extensively,” says Dr. Arora.

Purnima Risbud: Founder, Rasarang School of Performing Arts
Nrityotsav, a daylong festival of Indian classical dances, was Risbud’s dream. Nrityotsav debuted in Greater Boston in 2014, and was a super hit this year. Now, New Englanders can look forward to this event each year. “Growing up in Bangalore, I always dreamt of being a classical dancer performing in dance festivals and, at one time, organizing one myself,” Risbud says.”With the strong support from my husband Kedar Risbud, my friends Pallavi and Venki Nagesha, and many other volunteers, I have been able to organize classical dance festival Nrityotsav 2014 and 2015 for the second year in a row successfully.”

Sharma is an Interior designer who recently earned her Master’s degree from Suffolk University in Boston, a fine artist from India and also ” persuasive” Kathak dancer. “I always dreamt to adopt a kid. My dream was fulfilled this year with the help of my husband. I adopted two EKAL villages near Mathura, and I am glad I could be of some help to the children in need.” 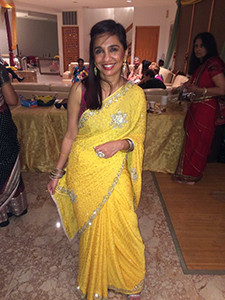 Dr. Aggarwal is a physician and president-elect of Indian Medical Association of New England. ” I am an avid traveler and last year I fulfilled my dream of visiting Israel, and visited old city of Jerusalem which is the birthplace of three religions -Christianity, Judaism and Islam .I was very fortunate to visit the iconic symbols :western wailing wall and the Dome of the rock. Water is so salty in dead sea that no fish and plants can survive in the sea, I got to take bath in Dead Sea.”

Sixteen-year-old Arora is a 10th grader and has many dreams. But unlike many teenagers, she has started to work towards realizing her dreams.”I have been able to achieve my dream of winning the title of ‘Miss Teen India Massachusetts’ in Miss India New England pageant in 2014, and fulfill my passion of acting and professional modelling.” 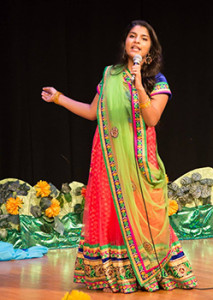 Janani Sharma: Passion for Music
Sharma is a Junior at Nashua North High School in Nashua, NH, and dreams becoming a singer. She was recently featured on ZeeTV for the very first SaReGaMaPa Lil’Champs North America — a reality show that is known for its’ highest Target Rating Point all over India, will sing Diwali and wedding songs. 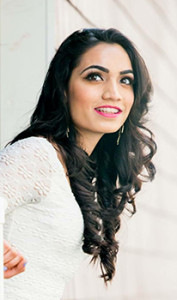 Shirin Bakre: Charity, Dance and Changing the World One Step at Time

Everything starts with a single spark for Bakre, a sophomore of Burlington High. She wants to change the world for the better. Volunteering and working toward it to achieve her dream, she chose to merge it with another goal which was to conclude her lifelong journey of learning dance with an Arangetram. She dedicated her Arangetram to Akshay Patra and raised awareness for its good cause, and raised just enough money to help underprivileged children in India. Bakre works towards her dreams and makes them a reality, changing the world one step at a time. 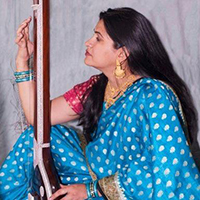 Jyoti Sharma: Dreaming of Making Her Daughter Realize Her Dream

Jyoti Sharma holds a Visharad music degree from Gandharva Maha Vildyalaya, India. She is trained in Agra and Jaipur gharana style of singing. Sharma specializes in classical, semi classical, Bhajan, Ghazals, Thumris as well as other light music forms. Her dream, however, is to make her daughter, Janani Sharma, realize her own dream of becoming a singer. She has written and composed some of her own ghazals , poetries and songs including “Shishu Bharti Hum hai”, an Anthem for the Shishu Bharti, a school of Indian language and culture in Greater Boston are.

(Pictured below: Mona and Tushar Patel) 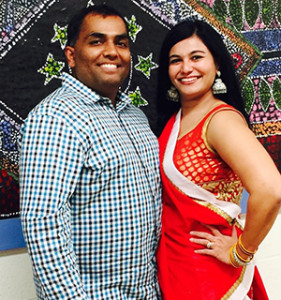 Team for the fashion show, which is presented by INE MultiMedia, includes Ruchika Arora, choreographer, fashion designer and state director for Miss India USA pageant; Vidhi Dalia, owner and make-up artist at Flawless Creations by Vidhi; and Ambika Mangtani, owner, IndofashionZ by Ambika Mangtani.
“It is a wonderful idea to bring together so many individuals with zeal and determination towards their passion and seeing that dreams do come true which I also believe in. Congratulations to Dr. Manju Seth and India New England New for bringing ‘Dreamcatchers’ interview series to the community,” said Arora.

The show is sponsored by Harvard Pilgrim Health Care, a not-for-profit health services company serving more than one million members in New England.

Your ticket for the: Fashion Show at Bridal Expo & Diwali at Taj Presents Dreamcatchers From Teens to Fifties