October 12, 2016
No comments yet
Dreamcatchers

WALTHAM, MA— Namita Dodwadkar truly is a dreamcatcher. “Feels like I am living a dream,” she says.

Who is Dodwadkar? What was, and still are, her dreams? In an exclusive video interview with Dreamcatchers, she talks about it all—from her journey from Pune to Northeastern University in Boston to pursue her Ph.D., to being a senior scientist at Novartis and teaching Latin Dance and being a wife. 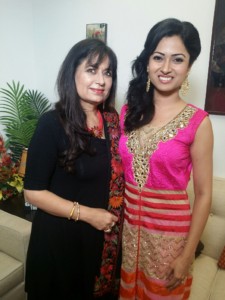 Born and raised in Pune, Dodwadkar came to the United States in 2007 for higher education and received her MS and Ph.D. from Northeastern University. Currently, she works as a Senior Scientist at Novartis where she focuses on research and development of anti-cancer medicines.

She has received two national awards and recognition so far: Mrs. India USA and American Association of Indian Pharmaceutical Scientists Research Award. She was also a finalist for Woman of the Year Award in 2015.

Her motto is: “I want to make a difference” in every facet of her life. Through her research, she wants to cure cancer without side effects. Through dance, she wants to impart her skills and help as many people as possible to express themselves, and through pageant titles, she wants to empower and encourage married women, as well as set an example for young girls, to continue to pursue their dreams and ambitions even after marriage.

Your ticket for the: Dreamcatcher: The First Mrs. India Worldwide Namita Dodwadkar