Saheli Raises Over $80,000 During it House-Full Fundraising Gala, Exceeds its Goal

September 21, 2015
No comments yet
Chai With Manju 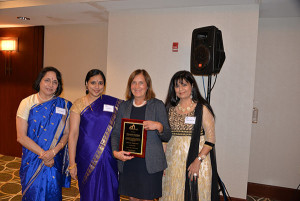 WALTHAM, MA—Saheli-Boston, a non-profit community-based organization that crusades against domestic violence and is dedicated to empowering South Asian women and their families in New England, raised over $80,000 and reached its stated goal during its fundraising gala on Sept. 18 at Westin Hotel in Waltham, MA.

“I am really excited to announce that we met our stated goal of $80k in total revenues. Donations are still flowing in from people who were unable to attend but want to support the cause,” said Anu Chitrapu, chair of Saheli fundraising gala committee. “Organizing galas is getting more challenging due to the rising costs of hotel rentals and other associated expenses. So it is really important that we raise enough money to cover our expenses and have enough for a significant empowerment fund. I am glad we were able to accomplish this.”

Chitrapu said the success of the event was largely due to generous support from sponsors, advertisers, attendees and donors.

“As far as running the event goes, kudos to my fantastic team of volunteers who executed to perfection. I could not have done this without their support and without my co-chair Dr. Manju Sheth,” Chitrapu said. “They say it takes a village… I say it takes the entire community to help Saheli accomplish its goals and I am glad the community is so supportive.”

Chitrapu and Dr. Sheth teamed together for the second time to serve as chair and co-chair for Saheli’s fundraising committee this year. Last time, the Chitrapu-Sheth duo had helped raise over $56,000 during the 2013 gala.

“When Anu and I had decided to lead the Saheli fundraising for the second time, our goals were simple. We wanted to increase the outreach of Saheli, do an elegant event and raise money for the empowerment fund,” said Dr. Sheth. “It was an honor for us to have State Treasurer Deb Goldberg at the event It was also wonderful to present Woman of the World group from Berklee College of Music at an Indian event for the first time .We had a full house of people who had a great time and opened their heart and wallets for Saheli. Thanks to Saheli leadership for their trust in us .We would like to thank all the volunteers who spent tireless hours to make this event a mega success.”

Founded in 1996, Saheli is a community-based women’s organization in New England whose mission is to empower South Asian women and their families to live safe and healthy lives. Led by a small staff and a cadre of dedicated volunteers headquartered in Burlington, MA, Saheli is uniquely focused on the needs of South Asians and offers help regardless of religion, ethnicity, age, gender or sexual orientation.

Your ticket for the: Saheli Raises Over $80,000 During it House-Full Fundraising Gala, Exceeds its Goal

Saheli Raises Over $80,000 During it House-Full Fundraising Gala, Exceeds its Goal